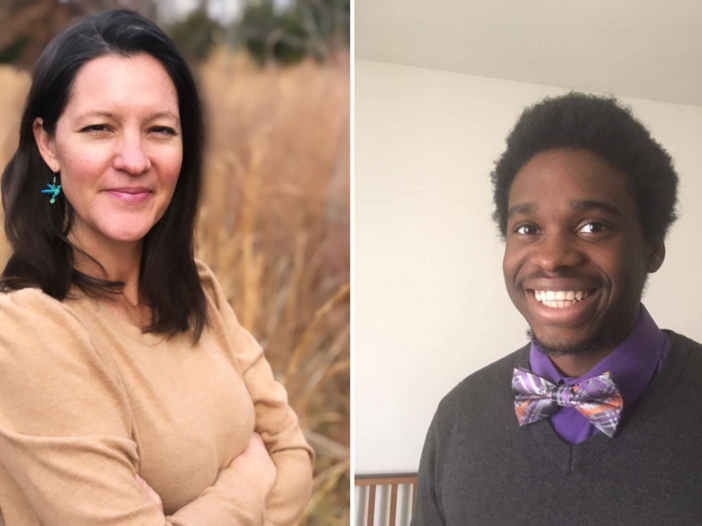 Envision Frederick County welcomes two local community champions to the Board of Directors in January.
Carey Murphy of Urbana and James Baker of Frederick joined the continuing members of the Board on January 1, bringing experience in sustainability and social equity to the leadership team.
“This is a thrilling time of growth for us,” said Elizabeth Bauer, Board Chair. “Having the capabilities and knowledge of these two individuals will help us expand our programming and intensify our focus so that we can have a broader  impact on behalf of Frederick County’s future.”
Carey, who grew up in Frederick County and has lived in Urbana for more than 20 years, is a Master Naturalist and co-founder of Green Team Urbana, a volunteer group committed to increasing biodiversity and restoring the ecological health of heavily developed areas. She holds a bachelor’s degree from Lafayette College and a Master of Arts  in Film and Video from American University.   She also serves on her Homeowners Association’s Grounds and Physical Assets Committee, coordinates sustainability initiatives at her children’s school, and advocates for pedestrian safety.
James has spent the past six years as a case manager and service coordinator for minority families through work at the Housing Authority of the City of Frederick and United Way’s Prosperity Center. A graduate of Hood College, he has served on (and often chaired) several boards in the community, including Frederick Coalition for Financial Success, Frederick City Government Sustainability Committee, Frederick City Youth Council Advisory Board, and Friends of Cunningham Falls and Gambrill State Parks. He was also a member of the Climate Emergency Mobilization Working Group (CEMWG).