Dedicated to Enhancing the Social, Economic, & Environmental Vitality of Our Community
Home » Frederick County is Struggling to Preserve its Rural Roads 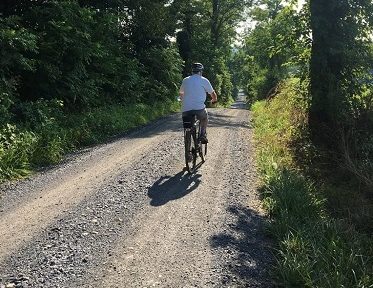 In 1977, there were more than 300 miles of gravel road in Frederick County, almost one quarter of all county-maintained roads at that time.  By 1996, we were down to 140 miles of gravel roads – a clear indicator of the county’s growing population.
After several years of strong citizen support at public hearings, the Board of County Commissioners unanimously adopted a proposal developed by an ad hoc committee of civic organization representatives, county staff, and the Friends of Rural Roads in 2002. The program suspended the county’s Stabilization Program, which had planned for all gravel roads remaining in the county to be eventually paved with a tar and chip surface. By then there were only 65 miles of actual gravel road left.  The new Rural Roads Program included other “unimproved” roads in addition to the original gravel roads, bringing the total mileage of protected roads to 111 miles. 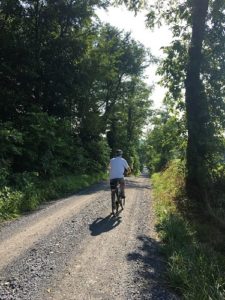 The Friends of Rural Roads considers roads for inclusion in the Program to be:

In 2009, Poffenberger Road in Jefferson was re-surfaced as an experimental project using Driving Surface Aggregate (DSA), a material and technique recommended by the Center for Dirt and Gravel Roads Studies at Penn State University. The hope was that the project could help determine if the costs of gravel road construction and maintenance could be reduced. 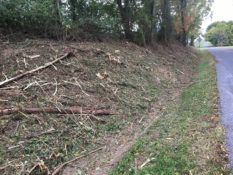 The Frederick County Rural Roads Program celebrated its 10th anniversary in 2012 with a series of events showcasing the value of gravel roads. These included a butterfly walk, a bird walk, plein air painting, a horseback ride, a Gravel Grinder bike trip, a photography contest, and an antique car circuit ride.
From 2012 to 2019, as Frederick County continued to grow, new residents on the rural roads began to request road improvements.  The Rural Roads Program provided a process for this option, requiring a written petition from a majority of the residents affected as well as public hearings with the Roads Board.  Several of the petitions were successful.
Major storms in the spring of 2018 caused flooding and road destruction countywide, especially along the gravel roads. As a result, more residents asked to be removed from the Rural Roads Program in order to have their roads repaired.  According to the county’s website at the time, there were 59 rural roads remaining, or only 83 miles.
Friends of Rural Roads has been working to find a solution that balances the preservation of scenic, historic roads while maintaining safe and accessible surfaces.  In February 2020, the County Executive established a Rural Roads Roundtable to discuss a re-visioning of the program so that “it balances the unique maintenance needs of these scenic roadways with the community’s goals to preserve and protect the scenic and historical qualities of the roads and nearby land.”  The roundtable included representatives from various interest groups such as the County Roads Board, Parks and Recreation, the Historic Preservation Commission, the Farm Bureau and the Friends of Rural Roads.
Unfortunately, the coronavirus pandemic has delayed any action by the Roundtable, and the Department of Public Works continues to perform boom mowing and other maintenance work that destroys the natural vegetation and tree canopy along these roads.
So, the Friends of Rural Roads are reaching out to our supporters to help persuade the county that our gravel roads need preservation now, not sometime in the future.  We want to re-educate people on the importance of roadside vegetation for traffic calming, soil retention, and wildlife habitat.  We need to remind them of the importance of our quality of life and how vegetation contributes to noise abatement, stress abatement, and the overall beauty of our surroundings.  We have lost more than two-thirds of our gravel roads in Frederick County, and we must hold on to the few that remain.
Learn more here:
Where is your nearest rural road? https://frederickcountymd.gov/DocumentCenter/View/308328/Rural-Roads-20180914
Friends of Rural Roads – Preserving the gravel roads of Frederick County, MD (ruralroadsfrederickmd.org)
Friends of Rural Roads (@ruralroadsfredco) • Instagram photos and videos
Kathy White is on the Advisory Board of Friends of Rural Roads, has lived in Frederick County for 20 years, and worked in Maryland public libraries (several different counties) for 40 years before retiring.

Kathy White is Advisory Board of Friends of Rural Roads, have lived in Frederick County for 20 years, and worked in Maryland public libraries (several different counties) for 40 years before retiring.