Dedicated to Enhancing the Social, Economic, & Environmental Vitality of Our Community
Home » A Duplex, a Triplex and a Fourplex can cut a block’s carbon impact 29% 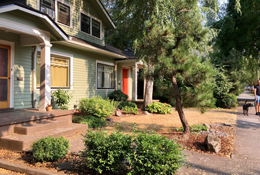 The carbon savings from ‘middle housing’ are voluntary, self-financing and immense. So why are they illegal? 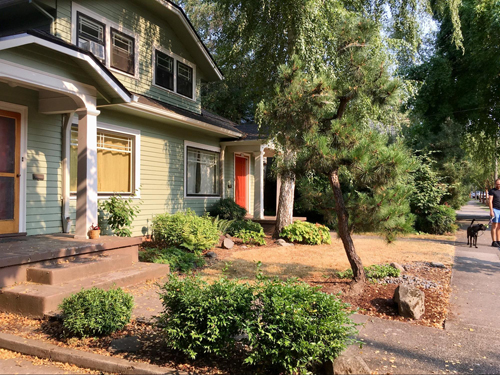 To understand why housing policy is climate policy, consider two city blocks with 18 homes each.
On one of those blocks, suppose something happens that’s currently legal almost everywhere: Three relatively old, disintegrating homes are torn down and replaced by three 3,400-square-foot homes.


Let’s call this the McMansion Block.
But on the other block, suppose we do something that’s currently illegal on most of the land in most cities, but would be legalized by reforms like Oregon’s House Bill 2001 or Portland’s residential infill project: we replace the three old homes with a fourplex, a duplex, and a triplex, respectively.

Let’s call this one the Plex Block.
Let’s also suppose that, due to new local caps on total building size, each home in the fourplex is 1,000 square feet; each home in the triplex is 1,150 square feet; and each home in the duplex is 1,500 square feet. (In other words, assume the city has decided to roughly follow Portland’s current proposal and require triplexes to be a bit smaller than fourplexes, etc.) Let’s also assume that each home holds 2.5 people on average, as in the rest of the United States and Canada.
On the McMansion Block, about $2 million has been spent on new construction, but the number of homes on the block hasn’t changed. On the Plex Block, it’s more like $2.1 million on construction, but the block just added six more, smaller homes.
If we compare these two blocks after all the new homes are complete, the housing-related carbon emissions per household of the Plex Block will be about 20 percent lower.

In this scenario, we haven’t put a price on carbon. The local power company hasn’t shut off its methane plant. Those things should happen as soon as possible, of course—and those things become politically easier when energy consumption per household is lower. But these things haven’t happened yet on Plex Block.
Just one thing is different on Plex Block. Instead of three households living in big homes, nine households are living in smaller ones. The other households don’t change at all. And that, only that, is enough to get Plex Block well on its way to the 90 percent decarbonization it will need to achieve by 2050.
It’s almost as if the Plex Block should be something we’re legally allowed to create. Sadly, on most urban land, we aren’t.
But how are these big carbon savings possible?
The short answer is that keeping a bunch of big, usually-empty rooms warm in the winter and cool in the summer burns a truly massive amount of carbon. 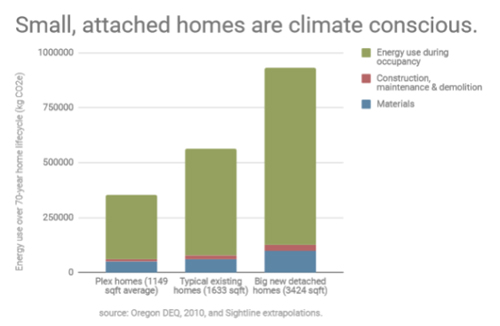 “No other sector offers a higher potential for a single source of reduction than residential efficiency,” the Natural Resources Defense Coalition concluded in 2017.
“A typically sized new single-family home built to industry standards is responsible for nearly 60 percent more emissions than a home approximately half its size,” my colleague Margaret Morales wrote last year.
Duplexes, triplexes and quads can also reduce driving—and save everyone money

The climate benefits above grow further when we include the potential transportation savings of letting people live closer to each other, to jobs and to shops.
When more people live within walking distance of any given street corner, that corner is more likely to get a frequent bus line, a local shop, a shareable car. Boosting the number of homes on residential blocks by one third (as on the Plex Block) correlates with a drop of about 1,000 miles driven per year per household, Margaret estimated last year—a 5 percent drop even after correcting for household size and income. If we’d assumed these new homes would otherwise have been built on the urban fringe instead of a close-in neighborhood, the contrast would be even sharper.
This density effect is probably strongest if it’s creating new options for living in a transit-rich, walkable area specifically for people who want to live a low-car life but couldn’t previously afford that sort of neighborhood. This, too, is exactly what duplexes, triplexes and fourplexes allow. By letting a few households split the high cost of land, they cut the minimum price for newly built market-rate homes and they boost the number of below-market, subsidized homes per public dollar.
Of course, the same people also save money by living in small, energy-efficient homes and driving less. Enough money, in fact, that many of them are willing and able to cover the transition costs themselves.
“Millions of Americans want to spend billions of their own dollars to cut their carbon emissions in half, if only local zoning would let them,” green housing advocate Payton Chung wrote in January.
Infill housing is no substitute for keeping fossil fuels in the ground, modernizing power grids, switching car trips to transit. We desperately need to do all those things, too. But infill housing makes all those measures go further, and it eases the transition to them.
Small attached homes aren’t right for every household, and they shouldn’t be mandatory. But they should at least be legal for anyone who does want them.
House Bill 2001, which advanced to a Ways and Means subcommittee with four weeks left in Oregon’s legislative session, is poised to set a national example by making Oregon the first US state to re-legalize middle housing in urban areas statewide. With its local “residential infill project” reform, due late this year or next, Portland could become one of the first large cities to enshrine these options in code.
As surely as a windmill or a solar array, every fourplex we build improves the lives of our children and grandchildren. We should all cheer for laws that legalize them—loud enough for everyone to hear.
Note: The rough calculation of home energy efficiency gains here assumes the other detached houses average 1,633 square feet each and have energy efficiency equivalent to a new house. It also assumes all structures will last 70 years; if the structures last longer, then total carbon savings of infill will be even greater. Some of the energy savings estimates here were extrapolated from per-square-foot efficiency gains from a larger attached home compared to a larger detached home. Here’s the spreadsheet I used.