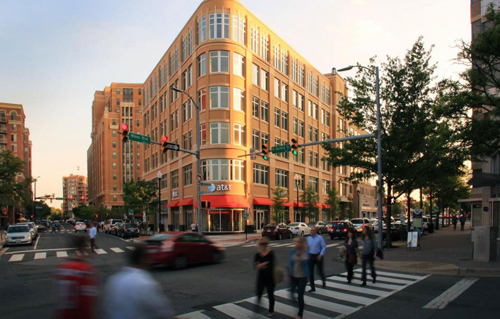 Our model for traffic congestion is flawed. We need to make the crucial distinction between good and bad congestion and plan our transportation systems accordingly.

A few years ago, after taking a blood test, my doctor told me I had a cholesterol problem. I wasn’t in immediate danger, but I started running regularly. After a year I returned for tests, and he told me the good news: My life expectancy had risen eight years. That was my best checkup ever. What had happened?
There are two kinds of cholesterol—high-density lipoprotein (HDL), known as good cholesterol, and low-density lipoprotein (LDL), known as bad cholesterol. My bad cholesterol levels had not changed. But my HDL, the good cholesterol, had significantly risen since I started exercising more. My overall cholesterol rose, and I became way healthier. It was then that I realized the huge importance of good cholesterol.
I can remember when doctors thought that all high cholesterol was bad. For the sake of the health of millions of people and for my lifestyle, thank goodness they made that distinction.
It seems, however, that traffic engineers and transportation planners are behind the curve. A few years back, former CNU president and CEO John Norquist wrote an article about “good congestion” and “bad congestion.” For more than a half century, the US and state governments have been waging a war against traffic congestion in general, spending billions of dollars to fight it through road widenings and new highways. This is fueled by an annual report, published by the Texas Transportation Institute (TTI) at Texas A&M, which generates a “congestion index” for each metro area. According to TTI, congestion is always bad, and it always costs money. When the TTI report comes out, it generates nationwide media coverage, and congestion is uniformly portrayed as bad.
Yet as Norquist reasonably points out, this assessment flies in the face of reality. Places that are healthy economically, that attract a lot of people, are often crowded. Cities that are dying economically—think Detroit in 2010—have very little congestion. A study last year by University of Colorado and Florida Atlantic University researchers found that, if anything, congestion has a positive impact on the health of cities. “Our findings suggest that a region’s economy is not significantly impacted by traffic congestion. In fact, the results even suggest a positive association between traffic congestion and economic productivity as well as jobs,” explain authors Wes Marshall and Eric Dumbaugh.
The bottom line is we are terribly confused about congestion, kinda like doctors were confused about cholesterol, but the subject makes a lot more sense when you consider Norquist’s model. In this article I’ll take a closer look at bad congestion and good congestion, how to tell the difference between the two, and why our current efforts to fight congestion are failing.
Good congestion is a place where everybody wants to be. A beautiful main street or lively downtown are examples—and that place is typically full of people—pedestrians, cyclists, drivers, transit riders. You find good congestion in a great destination.
Bad congestion is a place that where you only want to get through—but you can’t get through fast enough because of the congestion. Bad congestion often occurs in miserable places to be—like a beltway or major arterial road lined with strips malls and big box stores.
One easy way to tell the difference between good congestion and bad is to look around. Are there lots of people on foot? Do you see bicyclists on the street? Is the transit service frequent and mode share high? Then you probably have good congestion, because good congestion involves people outside of cars. The best congestion can be found when people are hardly moving at all. People are so happy to be in a particular location they are hanging around for the joy of it. Well-occupied outdoor café tables and park benches are top indicators of good congestion. People talk, buy food from a vender, maybe somebody plays guitar on the side of the best congested streets. The faces your see have purpose and animation—which means they are making connections, doing something meaningful in their lives.
Conversely, if the street is full of cars but nobody is around outside of cars, you’ve got bad congestion. Bad congestion is a joyless condition. Faces are resigned, frustrated, frowning. Hands gripping steering wheels. 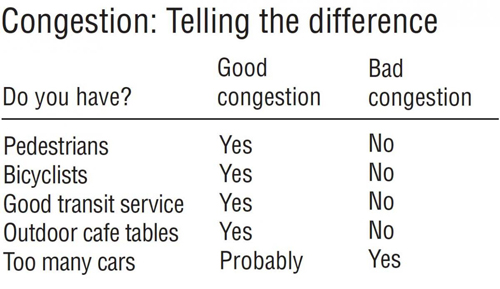