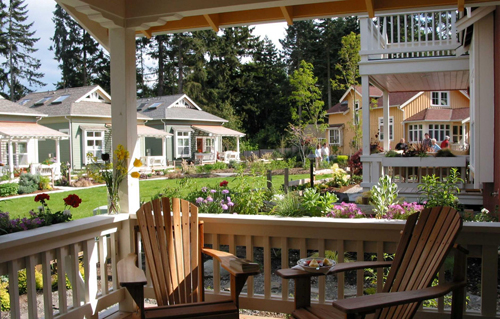 The American housing industry is changing course—and this will transform neighborhoods and communities over time by providing more and different choices in housing.


A new report from the National Association of Home Builders (NAHB), “Diversifying Housing Options With Smaller Lots and Smaller Homes,” examines a shift away from the suburban single-family house that has dominated the industry since 1950. Previous long-held resistance to smaller lot sizes is being reconsidered, and many cities are allowing the construction of multiple living units on individual lots.
According to the report:

Since this research started, more jurisdictions have adopted codes that encourage the construction of smaller house and unit types. For example, Minneapolis, Minnesota, is allowing triplexes by-right across all zones, Portland, Oregon, is in the later stages of revising its residential zones to more easily allow duplexes through 4-plexes, and Medford, Oregon, is in the process of revising its residential zones to allow a range of Missing Middle Housing by increasing the maximum density limits in walkable areas.

The NAHB report, written by Opticos Design, takes zoning reform and Missing Middle Housing beyond theoretical concepts—all of the information is based on built housing types and adopted zoning changes. Costs are included, as well as the successes and challenges of each example. The intended audience is primarily builders and the planners who regulate them. Yet even urbanists who are familiar with form-based codes (FBCs) and Missing Middle housing types will learn a lot from this practical report.
The authors address four approaches to zoning reform: Accessory Dwelling Units (ADUs), small-lot ordinances and density adjustments, cottage court ordinances, and form-based codes. The 120-page report has too much detail to cover all of these approaches here, but this article will zoom in on a few examples, such as ADUs—one of the simplest ways that cities can boost housing options. ADUs are attached or detached apartments on the same lot as a primary house.


Cities such as Portland, Oregon, and Los Angeles, California, have been able to substantially increase the number of ADUs permitted by reducing parking requirements and/or waiving fees.
Los Angeles’s regulations on ADUs changed when in 2017 the state legislature adopted a law stating that these units are allowed by right in California. Since then, approximately 6,500 applications have been filed for ADUs in the city, with about 5,400 in 2018 alone. “Los Angeles requires one parking spot for ADUs unless the location meets one of the city’s four criteria, including proximity to public transit, then no space is required,” the report states.
Portland has allowed ADUs since the 1990s. For a long time, fees were high and regulations were stringent for ADUs, and this kept the pace of construction slow. “After the removal of fees in 2010, the city saw a 10-fold increase in the number of ADU permits,” according to the report.
Portland’s waiver of fees, which was made permanent in 2016, has recently accompanied by restrictions on short-term rentals. About 600 ADUS have been built annually in Portland in recent years.
This wide-ranging report addresses short-term rentals and how they affect affordability. “Although a code may require smaller units, the enormous popularity of short-term rentals, such as AirBnB and VRBO, often results in the new smaller homes not offering long-term residences,” the report states. “This is one of the biggest challenges many communities are trying to address by regulating short term rentals.”
In addition to ADUs, the report includes detailed analysis on many building types and their regulation, including duplexes, townhouses, triplex and quadraplex, courtyard units, cottage courts (distinct from the courtyard type), mansion apartments, and others.

“Having a code that allows small units is a good step, but there are many other factors influencing how many units are actually built and at what cost, such as availability of financing, cost of construction, length of time for approvals, impact fees, and parking requirements,” the report states.
Many factors will impact affect the mix of housing in cities, but demand for Missing Middle types is likely to continue to rise, according to NAHB.
“Housing market projections suggest that construction in the near future will accelerate only moderately for single-family housing but will greatly increase for multifamily housing or Missing Middle Housing and its wide variety of sizes, housing levels, and accessibility,” the report states.