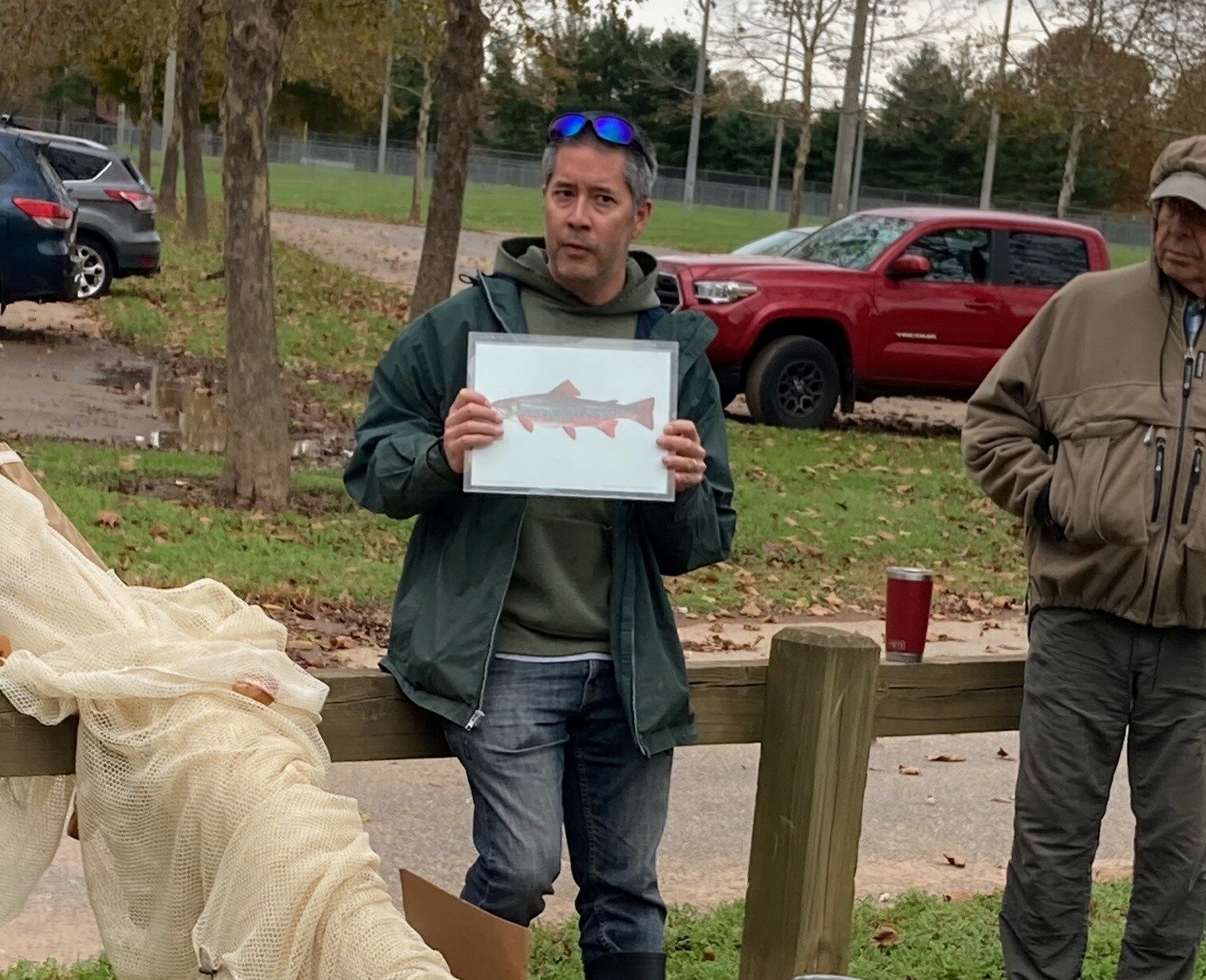 One of Envision’s key tenets is public engagement and understanding to help us advocate. The Sugarloaf Aquatic event was held for just that reason-to give us the science behind what we know we need-a conservation overlay in the Sugarloaf Livable Frederick Plan. For those who weren’t there, read on to see what we learned!

Even at times when we worry about breaks in our local food chain, there is reason to hope when people like Michael Kashiwagi are keeping an eye on what’s happening in our streams.
Michael is DNR’s Western Maryland Regional Fisheries manager, and he taught about 20 of us on a blustery rainy November morning about the fish in our region, how they are monitored, and what threats there are to some of the rarest species-especially in the area where we were focused: the Sugarloaf region, its watersheds and its coldwater streams.
We were especially focused on brook trout sto learn about the proposed  conservation zoning overlay in the Sugarloaf Treasured Landscape Management Plan, part of Livable Frederick.

We learned that a few parts of the Bennett Creek Watershed in the region are classified as Class 3 Coldwater Streams, where Brook Trout can thrive. We have lost them in many of our creeks in southern Frederick County (they thrive in northern Frederick County where forest cover and lack of development are protecting them). The brook trout need water temperature with an upper limit of 82 degrees F (28C) from June through the end of August.
Currently Bear Branch, which winds throughout Stronghold’s Sugarloaf Mt. private park, is the only location of wild brook trout; in all other areas, lack of forestry cover, impervious (paved) surfaces, and too many small ponds (which warm up in summer and when they “run” throughout the region can warm up streams.

Here’s the optimism: there is hope in a few unnamed tributaries that Michael and his team have been monitoring to see if they can maintain cold enough temperatures to offer a new place to test if brook trout can survive. To repopulate, you need 50-70 viable adults in a new stream. There are two invertebrates they are looking for to help prove the trout can find food: Tallaperla – roach like stonefly and sweltsa – green stonefly.
Just as I was writing this, I came across this article about the soon-to-be-declared extinction of the Maryland Darter. The article mentions the rivet-popping theory—that when you lose a few  (rivets on a plane) across the food chain, the concerns increase of more lethal damage.
The food chain, ecosystem and biodiversity aren’t the only things that should trouble us; anglers are suffering too, under a new 2020 law brook trout must be released after they are caught to preserve the population (Michael assured us that 95% of the fish caught and released survive the ordeal).
How You Can Help
Support the conservation overlay for the Sugarloaf Treasured Landscape Management Plan. Opportunities to testify will be coming soon. To be notified, email me-Linda@envisionfrederickcounty.org
Thank you to the sponsors of this event!

November 30, 2021More posts from this author