Dedicated to Enhancing the Social, Economic, & Environmental Vitality of Our Community
Home » Malls to mixed-use centers and other opportunities 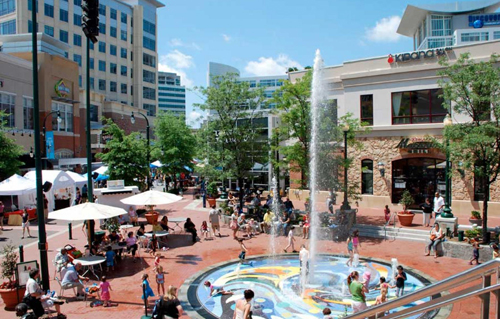 While hundreds of malls are declining, they are also being reused for all kinds of purposes—including walkable urban places in communities lacking in this kind of environment.

Some mall redevelopments have struggled, but have also adapted. Peninsula Town Center in Hampton, Virginia, retained two anchor stores from the old Coliseum Mall—Macy’s and JC Penney. Macy’s closed in 2016, part of the wave of closings nationwide. As a mixed-use town center, Peninsula has flexibility to respond to the market. Since 2017, development there has included: an Element Hotel; a warehouse-style retailer (Floor & Décor); a trampoline, zipline, and climbing entertainment complex called Sky Zone; and 169 living units.
Similarly, the Streets of Southglenn in Littleton, Colorado, lost a Sears store in late 2018 that was also a holdover from the previous mall. The owners plan to turn the vacant building into apartments and office space with first floor retail or entertainment.
Converting malls into mixed-use centers continues to draw substantial developer interest. Officials envision a mixed-use urban center on the site of the Carousel Mall in San Bernardino, California, which closed in 2017. The city recently received 11 proposals from developers to redevelop the 43-acre site. In Amherst, New York, officials are seeking redevelopment of the Boulevard Mall, one of several that sit in a federal Opportunity Zone.
In Alexandria, Virginia, the Howard Hughes Corporation is moving forward with a 5.6 million-square-foot redevelopment of the 51-acre former Landmark Mall. The project includes buildings as tall as 250 feet on a new urban street layout.
Construction of Downtown Westminster is rapidly advancing in Westminster, Colorado—a suburban city formerly lacking a walkable downtown. The development will include living space for 5,000 people, with substantial affordable housing, and 1.7 million square feet of commercial uses—such as a grocery store, shops, restaurants, a movie theater, and office space. There will be 18 publicly accessible parks and civic spaces.
Downtown Westminster is designed to grow incrementally. The city purchased the site and is acting as the “horizontal developer,” selling individual parcels to developers who are implementing the vertical construction. In addition to building the streets, infrastructure, and key public spaces, the city built a “park once” parking garage.
The first mixed-use project—including affordable housing, townhouses, and ground floor retail space—was completed in July. The Alamo Drafthouse Cinema—a combined multiplex and craft brew house—also opened in mid-summer. Other projects, including more apartments and a hotel, are under construction.
Some urbanists are wary
Not all urbanists think the “malls to mixed-use centers” strategy makes sense. “Nothing will dampen the zeal for redeveloping malls more than actually doing it,” says John Anderson, one of the founders of the Incremental Development Alliance. “Bringing back a Main Street or streetcar [suburb] has the advantages of smaller increments, smaller buildings, and a connected network of streets.”
“Malls are typically big, lumpy buildings” surrounded by automobile-oriented arterial thoroughfares, he accurately points out. “The large-scale outfits with the capacity to redevelop those sites have plenty of opportunities elsewhere. The carcasses of dead malls will linger for a long time and their numbers will continue to grow.”
Charles Marohn, author of Strong Towns: A Bottom-Up Revolution to Rebuild American Prosperity, is likewise skeptical of this idea. “I have serious doubts about the capacity of Americans to experience Suburban Retrofit as anything more than a niche undertaking in the most affluent places,” he says. “The cost of these projects is enormous, far beyond what makes sense for most places.”
On the other hand, Marohn touts a value-per-acre measure as a test of high financial productivity. Once built out, mixed-use centers have high value per acre. If well designed, they also meet other heuristic tests that correlate with wealth creation—connected networks of streets and a high quality public realm. And not all of the suburbs doing this are the “most affluent” kind. Lakewood, Hampton, Westminster, Littleton, San Bernardino, and Mashpee are economically diverse communities.
The malls that are experiencing trouble are testing many ideas to remain viable. Most are expanding their appeal beyond retail and providing experiences you can’t get online. “The Palisades Center in West Nyack, New York, has a bowling alley, a comedy club and an indoor rope-climbing course,” notes Time. Other malls are pouring money into updating food courts to include ethnic and gourmet fare.
More radically, some malls are turning vacant department stores into apartments. The Simon Property Group, the nation’s largest mall owner, plans to build 600 apartments in the Oxford Valley Mall in Bucks County, Pennsylvania. In Phipps Plaza in Atlanta, the developer already built apartments and an office building. Some malls are adding nontraditional uses, such as churches and architectural services.
There are two main choices for malls that die: Scrape and do mixed-use, or turn the old buildings into employment centers, Gibbs says. For those that choose mixed-use, a smaller amount of retail (35,000-40,000 square feet) is generally sustainable, he says. “These projects are usually home runs for residential, and pretty good for retail.”
Dead malls can be strong locations for mixed-use office space. Employers now pay a premium to locate in walkable urban places, according to the <em>Foot Traffic Ahead 2019 report.
Malls to mixed-use centers have succeeded in many places coast to coast—and yet this is not the answer in every market, says Dunham-Jones. “In areas where jobs and population growth are stagnant or declining, communities would do better to invest economic energy and social life back into their historic Main Streets and look at dead mall sites as opportunities for different uses,” she says.
In Westminster, Colorado, demographic shifts support a mixed-use approach. “The demographics of our society are changing very quickly and people are really wanting to do everything in one place,” said Jody Andrews, Westminster deputy city manager, told Fox 31 in Denver.