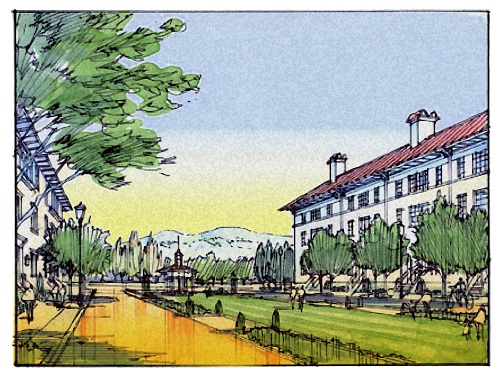 The Livable Frederick Master Plan, adopted by the county in 2019, lays out a vision for what we hope Frederick County will look like in the decades ahead, and also offers plans for how to achieve that vision. Part of the implementation process is a review of areas within the county and the development of plans for those specific areas. The Sugarloaf Area Plan was the first area to be examined and planned, and The South Frederick Corridors Plan is the second.
The South Frederick corridors have made up a major economic center for decades, and are comprised of existing commercial and industrial land to the south of Frederick City along Urbana Pike (MD 85) and Buckeystown Pike (MD 355). This area constitutes 20% of county jobs, 15% of the county’s business establishments, and 15% of the county’s total wages. 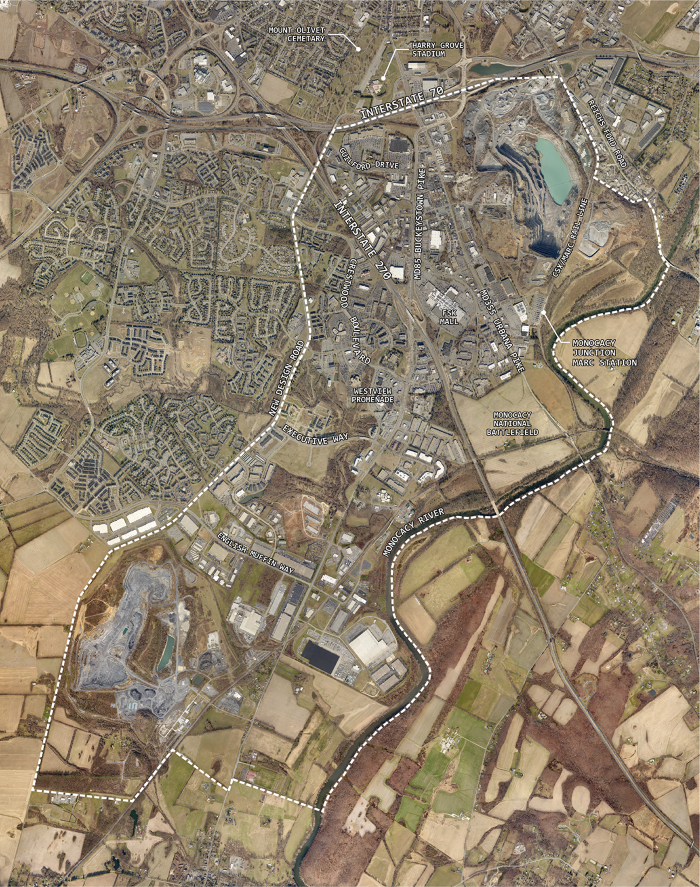 Since October 2020, county planning staff, along with a scoping group composed of 16 participants representing a broad spectrum of interests, have been examining this area and discussing the potential for this area if it were to be redeveloped. We have been tasked with reimagining what this area could look like. Past meetings of the scoping group are archived at South Frederick Corridors Public Portal, and an interactive map of the area is also located at the portal.
Beginning April 5,  the planning process opens up to a larger group of stakeholders with a  Design Charrette composed of four sessions. After this process is complete in mid-April, county planning staff will then develop a draft plan that will be presented to the Frederick County Planning Commission for review and public hearing and eventually a recommended plan will be presented to the County Council for final approval.
Already a major economic center for the county, I see greater potential for this thriving area if it is reimagined and redeveloped creatively. Along with ensuring and enhancing the economic strength of the corridors, there is great opportunity for the addition of a substantial number of homes mixed in with the commercial areas.
It’s projected that the county will add an additional 45,000 households by the year 2050.  Although much of this residential growth is already accounted for in existing pipelines and will occur within Frederick City as well as other municipalities and designated growth areas, the South Frederick Corridors area has the potential to be home to a large portion of this growth. Substantial infrastructure is already in place and it wouldn’t require taking any more farmland.
The Area Plan could provide opportunities for a wide range of housing options at diverse price points and diverse housing types, including options that are affordable for the general workforce, such as those who work at many of the businesses within the corridors. As Chair of the Frederick County Affordable Housing Council, providing housing for those with modest incomes is a special focus of mine. Incentives for workforce housing could be provided through an Affordable Housing Overlay applied in select areas.
The Plan should allow for a complete transformation of the Francis Scott Key Mall and surrounding area. This area could become a new Mixed Use Center with street level businesses, residences above, along with plazas for outdoor dining and strolling, softened by green spaces.


As the corridors are transformed over the years with more housing built within and/or in close proximity to commercial areas, the plan should provide for easy, multimodal access within and between communities and nearby businesses and allow for better use of the area near the Monocacy MARC Station 2 with Transit Oriented Development, creating a transit hub for the area. The entire area should be walkable, have a robust public transit system, as well as a system of bikeways crisscrossing the area.
As the area is redeveloped and density increases, it’s crucial that the plan provide for urban parks and green spaces that promote health and enhance livability, as well as public art that can humanize the built environment and give areas a sense of place. It’s important for the area to be people centric, rather than car centric.
These are just some of my thoughts about the corridors. Everyone is welcome and encouraged to offer their own input so that the South Frederick Corridors area can offer greater opportunities and can be a place that is truly vibrant and livable for Frederick County residents.

Mark Long serves on the boards of Envision Frederick County, IHA and Kitsune, Inc, serves as chair of the Frederick County Affordable Housing Council and the Emmitsburg Planning Commission, and resides in Emmitsburg with his wife Jill and growing puppy Watson.

Mark Long serves on the boards of Envision Frederick County, IHA and Kitsune, Inc, serves as chair of the Frederick County Affordable Housing Council and the Emmitsburg Planning Commission, and resides in Emmitsburg with his wife Jill and growing puppy Watson.